Tibetan Buddhism is one of the popular series of Mahayana Buddhism and is especially practiced widely in Tibet, Mongolia, Tuva, Bhutan, Kalmykia and certain regions of Himalayan regions of Nepal and India.

The Tibetan Buddhism comprises the philosophy of Madhyamika and Yogacara , Tantric symbolic rituals, the shamanistic features of Bon religion and Theravadin discipline. Tibetan Buddhism is based on the teachings of three major vehicles of Buddhism: Mahayana, the Foundational Vehicle, and Vajrayana. Tibetan Buddhism is most well known to the world through the existence of the Dalai Lama. The Dalai Lama is the exiled spiritual and political leader of Tibet. In 1989, The 14th Dalai Lama was awarded the Nobel Peace Prize for his lifelong advocacy for Tibetans inside and outside the Tibet.

The first significant event that occurred in the history of Tibetan Buddhism was during the 7th Century (c. 641). But it is found in some texts that certain Buddhist scriptures were arrived in Southern Tibet in early 173 AD from India. During the reign of King Songtsen Gampo, he unified Tibet and married two Buddhist wives (Princess Wencheng from China, and Princess Bhrikuti Devi from Nepal). Princess Bhrikuti Devi is known as Bal-mo-bza’ Khri-btsun, Bhelsa Tritsun and Khri b tsun and is believed to be the incarnation of Tara. According to Tibetan Tradition, Bhrikuti was a devout Buddhist and brought many sacred images and texts and expert Nepali craftsmen as a part of a dowry. The Red Palace of Marpo Ri in Lhasa was originally constructed by Nepali craftsmen under Bhrikuti wishes. King Songtsen Gampo then made Buddhism, a state religion of Tibet and constructed 108 Buddhist temples in the region and also constructed Jokhang Temple to house the Buddha statues.
The most important in Tibetan Buddhism history that took place was when the great Tantric Padmasambhava of India arrived in Tibet in 774. It was Padmasambhava (popularly known as Guru Rinpoche) who merged Tantric Buddhism with the local religion Bon, which has been in the conflict with the Buddhism religion started by King Songtsen Gampo, to form a new tradition we now recognize as Tibetan Buddhism. One of the oldest Tibetan school, Nyingma, from which all the other Tibetan Buddhism schools were derived, was established by Padmasambhava. Padmasambhava had a great influence on Tibetan Buddhism and he wrote many Tibetan scriptures for the future monks. 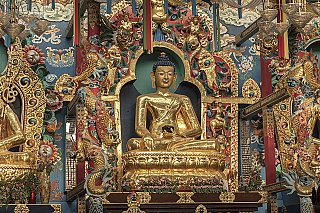 Tibetan Buddhism comprises various methods of practicing Buddhism and they are as follows:

2. Devotion to a Guru

Vajrayana tradition is practiced by most of Tibetan Buddhism since Tibetans believed that Vajrayana is the fastest method to attain Buddhahood.

The four main schools that teach the Tibetan Buddhism are:

‹Nyingma is also known as Schools of the Ancients. It is the oldest Tibetan Buddhist school established in Tibet and second largest after Geluk Tibetan School. This school is based on the teaching of Padmasambhava since he is referred as the “Second Buddha”. The Nyingma School uses a distinctive doctrine which is called Dzogchen (“Great Perfection”).

It is the smallest Tibetan Buddhist school compared to other three schools. It is named after the word Sakya (“Gray Earth”) monastery in the southern Tibet. The Sakyapa School had great influence during 13 and 14th Centuries.

Kagyu is the third largest Tibetan Buddhist school in the Tibet. The meaning of Kagyu is Oral Transmission School.

Gelug is the largest Tibetan School but is the youngest school among the four main schools of Tibetan Buddhism. Gelug School can be interpreted as School of Virtuous and also called Yellow Hats.

The Dalai Lama is the head of one of the most important and dominant school of Tibetan Buddhism, The Gelug (Yellow Hats) School. The Dalai Lama is believed to be the successor or manifestations of Avalokiteshvara . The current Dalai Lama is Tenzin Gyatso and he won the Nobel Peace Prize in 1989. The unique characteristics of Dalai Lama are its system of reincarnating lamas.

The Jokhang Temple is first Buddhist temple in Tibet which is located on Barkhor Square in Lhasa. For most Tibetans, the Jokhang temple is the most sacred and important temple in Tibet. It is listed in the UNESCO World Heritage Site and is probably most popular tourist attraction in Lhasa.

Tibetan Statues in our catalog 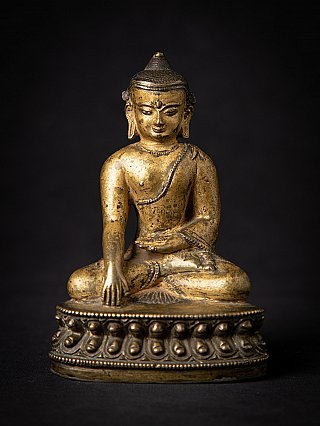